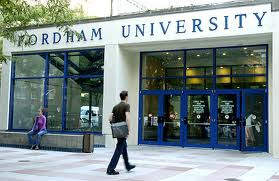 I took a quick one-night trip to New York City on Monday to attend a senior awards dinner at Fordham University’s Lincoln Center campus.  I was invited by the Dean of Students and was asked not to tell my son that I was coming because my son didn’t even know that he was going to receive an award.  My lips were sealed and my bag was packed.  There was no way that I was going to miss this event because this is the kind of stuff that parents live for.

But at the same time I couldn’t leak the info to my son who had called me this past weekend and asked if I had received anything in the mail about the awards dinner.  “No,” I said calmly.  “Nothing came.”  I was very casual about it and said I  guess he would have to go to the dinner like everyone else to see who ends up with an award.

He never suspected that I was taking time off work and traveling to New York City just to see him receive this important award.  I had my back to entrance of the room and until he got to the table where I was already seated, he still had no idea I was there.  As he approached, I stood up and turned around and he was genuinely so surprised and taken aback to see me.  “MOOOOM,” he said enthusiatically.  As those around us watched us hug, my son spontaneously said in a voice louder than I wanted, “Mom, you are such a good liar!”  Yes, I thought to myself, that’s just what every mother wants to be known for…her ability to lie…Oh well.

In the spirit of Fordham’s Senior Leadership Awards, I’d like to give a big shout out — WOOOO WOOOO — and a huge Mama hug to my son who has worked so, so hard these past four years!  Single parenting can be such a crapshoot but in this case, right now, it’s all good!!!!!!!

I am so proud of him and his work ethic.  I have never seen him happier than he was on Monday night.  Fordham has been a wonderful and challenging experience for him.  He discovered for himself that you get out of life what you put into it, made a lot of new friends and found his passion which has turned into a paying job after graduation.

His smile and demeanor from that night are cemented in my memory!!  My child figured out how to set his goals and work hard to achieve them.  And he is happy!

Isn’t that what every parents hopes for?