When I am with my good solid girlfriends — women whom I have known for years and years and years — I know I am blessed.
When we get together we may be going on about our children, our hair color, a new diet or some story we heard about on the news, but the under current of all of that warm wonderful and familiar chatter is the inner knowledge that we are sistas who have each other’s backs and always will!
Through beautiful and great times, times of trauma and then those other ugly times when you need to just pull up your big girl pants and get on with your life as you heal and rebuild, my girlfriends have been there for me and I have been there for them.  Life is richer with my amazing friends for they are the glue that holds me together and in turn, I hope I do the same for them.
Whether you have girlfriends from childhood or adulthood or if you are extremely lucky you have a mix of friends from diffferent ages of your life, please read Ann Hood’s (pictured below) compelling story recently published in PARADE magazine that takes us to her mother’s house on a Friday night where a group of women known as “The Girls”  have gathered to play cards. 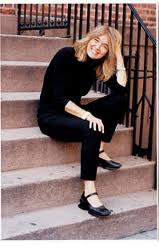 Loyal, loud, tough-talking—these were friends impossible to replace.
The Girls
By Ann Hood

Every Friday night, they gathered at one of their houses in a cloud of cigarette smoke and Aqua Net. They came in twos or threes, dressed in velour sweat suits, skirts with matching sweaters, elastic-waist jeans, and shirts that said BEST MOM or DECK THE HALLS. In their hands: coffee cans filled with pennies that clanked as they walked. Some wore wigs, big bubbles of fake hair. Or wiglets or falls, bobby-pinned in place like the mantillas they wore to church on Sunday. There were 12 in all. The Dirty Dozen, they called themselves. But more often, they were just The Girls.

Most had grown up together in Natick, R.I., a small village in a small state. Their houses all sat within a mile of each other. Yet they arrived in station wagons, the ones they drove to and from school, the beach, and the park, overloaded with kids.

Their husbands were foremen in factories. Others worked on the army base or ran the produce department or the deli counter at the local store. One of The Girls—no one could remember how she came to join them—was married to a doctor. She wore a blond fall, cat-eye glasses, drank Chablis. She didn’t fit in, really. The Girls married young and stayed married. This one had an affair and left town. Then they were 11 around the kitchen tables covered with plastic cloths.

My mother was part of this group. For as long as I can remember, Friday nights were sacred, hers. The hurried dinner—maybe tuna casserole, eggs in purgatory, fish and chips from the takeout place. Then her disappearance to get ready. She left my father in charge for the evening, which meant popcorn and Dr. Pepper and staying up late. But never late enough for me to hear her come home.

Best was when it was my mother’s turn to host. She began cooking on Wednesday. Marinating. Peeling. Simmering. Friday we were banished to the TV room so she could set up metal trays with small bowls of chips and dip, platters of cold cuts or fried chicken or meat loaf. Always a salad. Always cake or pie.

On my mother’s nights, it was impossible to fall asleep. The excitement of The Girls, so many of them! All squeezed around our small table, laughing and smoking and playing poker. I would creep down the stairs and sit on the harvest gold carpet, listening. They shared worries: about husbands and children and money, always money because there was never enough. They told each other “I hate you” and “I love you” with equal passion and frequency. They were not like mothers on television. No, they were rough around the edges, high school dropouts, secretaries, and assembly-line workers. They spoke with a hard accent that dropped r’s and added s’s. Kmahts, they said, instead of Kmart. “Your deals” instead of “your deal.”

Years of Friday nights passed. Three of The Girls moved away. Then cancer struck. Colon. Lung, twice. The Girls dwindled from 11 to eight to five. Alzheimer’s dropped them to four. They broke hips and had cataract surgeries, knee replacements, and lumpectomies. Still, they met every Friday night.

After their families were grown, they took trips. To Atlantic City. To Foxwoods casino in Connecticut. Overnights and weekends and afternoons. They met for coffee and counted their pennies and planned more trips to more casinos.

Then one day, one of them was driving home from my mother’s when she was hit broadside by a teenager in his brand-new car. She died instantly. That Friday was the first Friday that The Girls didn’t play. The next week, another one was diagnosed with stage 4 cancer; she lived only four months.

Unsure how to help my mother heal, I signed us up for bridge classes with my 19-year-old son. I imagined finding a fourth player, setting a new routine. I imagined I could convince her that things weren’t as bad as they seemed, even though I knew they were.

The day before the last class, the teacher announced that we were all bridge players now. “You can go home and teach your friends,” he said triumphantly.

“My friends are all dead,” my mother said softly.

I glanced over at her. She had turned her head so that no one could see her crying. How foolish I was to think that a new foursome, could replace The Girls. I realized in that moment that there are some things for which there are no substitutes. There are some things that we must mourn and cherish and say goodbye to.

Every so often now, on a Friday night, I drive to my mother’s. I bring her treats that make her smile: a bouquet of zinnias, an apple pie warm from the oven, a bunch of flat-leaf parsley. I drink coffee with her and talk about things that don’t matter. She’ll look around the empty table and say, in a voice filled with wonder, “Just yesterday, we were all here playing cards.” I take her hand, bent with arthritis, rough from hard work, and I hold on tight. Or as tight as I can before I let go.