I’ve done it in the grocery store in the applesauce aisle.  I’ve also done it while walking down 17th Street, NW and on the Metro platform at Farragut North.
What have I done?
Crying in public.  And you know what?
When I was doing it, I could have cared less about who I ran into or what I looked like.  I was in the throes of grief and I had either heard a song that reminded me of my husband or was coming from a situation where no one acknowledged my loss or what was happening to me.
When I was doing it, I felt as if I was in a bubble; a bubble of trouble, and I had no expectations that anyone would come up to me and put their arms around me or try to comfort me.
I did it because I wanted to; plain and simple and it made me feel better.  I was not trying to draw attention to myself.  I was just trying to put myself back together and crying was liberating.After reading the story below, I know that I’m not alone.  And if you find yourself crying in public, don’t feel ashamed. 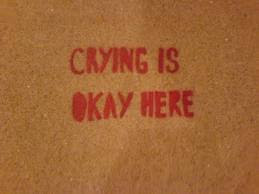 Look at Me, I’m Crying