“This I Believe” is a fantastic book that keeps on giving inspiration to me.
I recently discovered this book quite by accident.  I was in Richmond, Virginia with my son and his girlfriend and we came upon a local non-profit that was giving away books for free.  I couldn’t believe it.  Free. Books.
Free books are irresistible to me.  This would be similar to offering the editor of Vogue free clothes and accessories.  A room of tables full of all kinds of books just waiting for someone to come along and adopt them and take them home.  Where do I start?  I immediately wondered how many I would be able to carry to the car.
Early in my book grab, I found “This I Believe” and I snatched it up right away because the subtitle of the book said it was about “The personal philosophies of remarkable men and women”  and is also based on the NPR series of the same name.  “This I Believe” features 80 essayists, some famous and some unknown, writing to complete the thought that begins the book’s title. 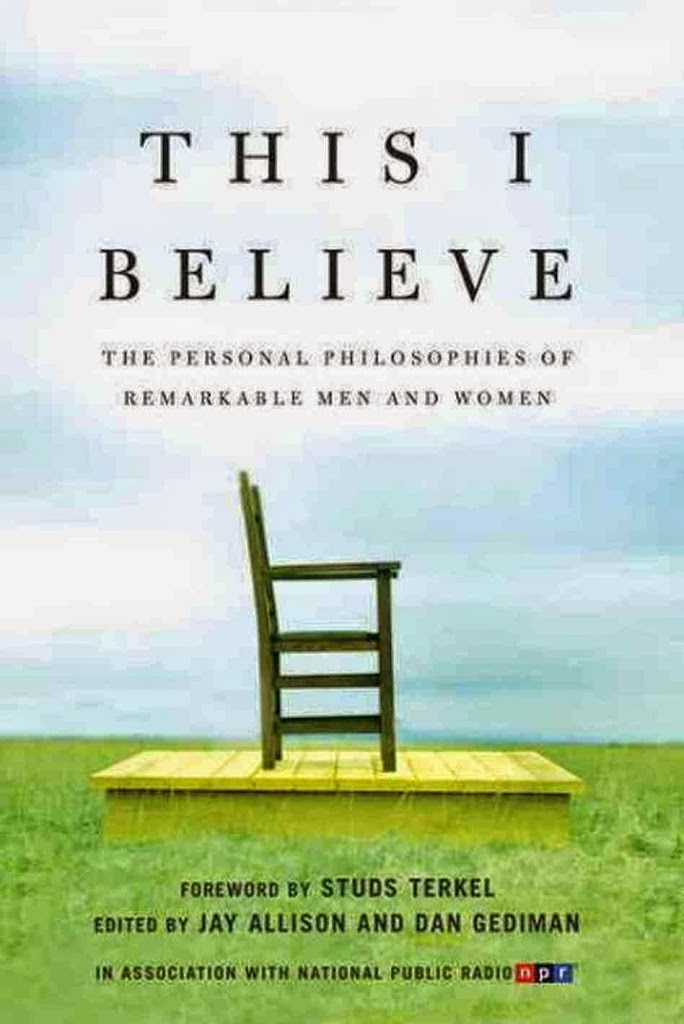 I decided I didn’t want to read the essays in order; that jumping around from famous to unknown and back again would make the book more interesting.  One essay, titled “The Making of Poems” caught my eye because beautifully written poetry expands my viewpoint of the world.  Quickly, I found that the essay is really about resilience, one of my favorite topics to explore and talk to others about for never ending periods of time.
I love to find out how a person has pulled themselves back together after a personal crisis and what has kept them going.  What fuels their inner strength?  How did they learn so much from the pain in their life?  I think the answer is as varied as the billions of people making up Planet Earth but in this case, let’s focus on author Gregory Orr’s resilience and his remarkable essay which begins here:
The Making of Poems
By Gregory Orr
I believe in poetry as a way of surviving the emotional chaos, spiritual confusions, and traumatic events that come with being alive.
When I was twelve years old, I was responsible for the death of my younger brother in a hunting accident.  I held the rifle that killed him.  In a single moment, my world changed forever.  I felt grief, terror, shame, and despair more deeply than I could ever have imagined.  In the aftermath, no one in my shattered family could speak to me about my brother’s death, and their silence left me alone with all my agonizing emotions.  And under those emotions, something even more terrible : a knowledge that all the easy meanings I had lived by until then had been suddenly and utterly abolished.
One consequence of traumatic violence is that it isolates its victims.  It can cut us off from other people, cutting us off from our own emotional lives until we go numb and move through the world as if only half alive.  As a young person, I found something to set against my growing sense of isolation and numbness: the making of poems.
When I write a poem, I process experience.  I take what’s inside of me — the raw, chaotic material of feeling or memory — and translate it into words and then shape those words into the rhythmical language we call a poem.  This process brings me a kind of wild joy.  Before, I was powerless and passive in the face of my confusion, but now I am active: the powerful shaper of my experience.  I am transforming it into a lucid meaning.
Because poems are meanings, and even the saddest poems I write is proof that I want to survive.  And therefore it represents an affirmation of life in all its complexities and contradictions.
An additional miracle comes to me as the maker of poems: Because poems can be shared between poet and audience, they also become a further triumph over human isolation.
Whenever I read a poem that moves me, I know I’m not alone in the world.  I feel a connection to the person who wrote it, knowing that he or she has gone through something similar to what I’ve experienced, or felt something like what I have felt.  And their poem gives me hope and courage, because I know that they survived, that their life force was strong enough to turn experience into words and shape it into meaning and then bring it toward me to share.  The gift of their poem enters deeply into me and helps me live and believe in living.
Share this post:

Lessons from the Spin Cycle