A big shout out today goes to the multi-talented singer songwriter Owen Danoff for exceeding his Kickstarter goal of $15,000!!!
Owen and his supporters raised $19,391 by June 30 and now Owen has the money to record his debut album this year!!!  In fact, he’s already started work on his album.  This past weekend, he and his rockin’ band went to NYC to spend time in a recording studio putting down music tracks. 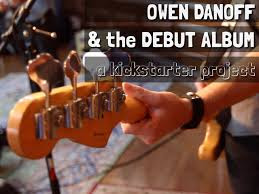 I write about this today because it is truly exciting and yes, healing, to watch someone who I have know since he was a baby find his passion in life and then follow it.  It’s healing because it is renewing and energizing to see Owen or anyone else commit to their talents and continue to work hard at developing and mastering them.
Everyone has a talent and everyone does something a little better than someone else.  It doesn’t matter how old you are or what phase of life you are in, there is always time for you to develop and follow your passions.
If you are not familiar with Kickstarter, it is an online resource dedicated to funding creative projects.  Films, games, music, art and technology, Kickstarter allows the person proposing the project with a funding goal and deadline to have complete control over it.  Kickstarter offers an online platform where people can pledge money directly to fund a proposed project to make it happen
Here, in Owen’s words, are some of the reasons why he wanted to record an album:
“Music is about how it makes you feel, and I know the feeling of having a friend in a favorite album when there’s no one else to turn to. I know the feeling of listening to a song that’s so in tune with the world around you that you can’t help but dance a little in public, or close your eyes and soak it in. I know the feeling of sitting on a bus or a plane for hours, and putting in headphones to let music steal away the time.
Those feelings, those connections we have with the music we love, are magic. If you give me the chance, I will do my best to create that magic for you.”
If you haven’t heard Owen Danoff before, I have posted a video of him and his band singing a song a wrote called, “On & On & On.”  I liked it from the first time I heard it.  It has a driving beat and I love the lyrics.

Here’s to Owen’s debut album and may good luck continue to follow him and his band “On & On & On” as he goes about creating his magical music for us.

Get Your S#%t Together