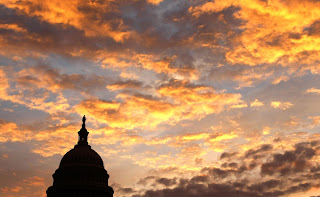 The security of our nation, the security of our borders, the security of our everyday lives was at the top of the nation’s agenda.  No one could do enough to make America safe and secure.  And we were willing to do whatever it took to make it happen: reduced civil liberties, metal detectors and wands, pat downs, no shoes.A decade later, 9/11 mastermind Osama bin Laden is finally dead as are some of his top operatives.

But how safe are we?

When the 10th anniversary of 9/11 arrives on Sunday, Americans will pause and remember where they were when they first saw or heard the shocking news of the attacks on New York City’s Twin Towers, Washington, DC’s Pentagon building and the crash of Flight 93 in Shanksville, PA.

It was a horrific and terrifying day; a day when the unthinkable became reality.

It’s a reality playing over and over again this week on television, newspapers, the web and magazine.  I have watched a few television specials this week featuring the live 9/11 footage of the planes crashing, the towers falling and people in NY and DC running to get out of the way of the attacks and find safety.

I think I’ve seen enough and will probably not watch any more 9/11 television because my memory of those events is clear.  I can flash back to those raw and gritty images all on my own.  The repetition of seeing the events is not a healthy or healing process for me.

Instead, I am looking for stories about people who courageously pushed through their pain and chose to rebuild their lives, turning their losses into the pursuit of a positive cause honoring the memory of the loved one they lost on 9/11.

One touching story that particularly stood out for me is the story of Jack and Lauren Grandcolas.  Lauren, 38, was pregnant when she died on United Flight 93, which was hijacked by the terrorists and crashed in a field near Shankesville, PA.  After battling grief and depression, Jack started a foundation in his wife’s name that financially supports a state-of-the-art birthing room at Marin General Hospital in California.

Here is a link to a short video and story about Jack and Lauren Grandcolas: