A spilled box of cereal this weekend took me through an unexpected, yet healthy exercise.
While trying to do too many things at the same time in the kitchen, I spilled a box of cereal inside one of my kitchen cabinets.  Don’t you hate it when that happens?
It was such a klutzy move and right away I was annoyed with myself.  I looked at the shelf with the cereal spilled everywhere inside the cabinet and knew I was going to have to take everything out and vacuum the shelf.  Damn! What a pain!
I knew the sooner I started the sooner it would be over.  While muttering to myself, one by one I pulled all the items from their shelves and put them on the counter and on the floor.  Of course, you know what happened next.  One cabinet led to another cabinet and before I knew it, I had a full fledged kitchen project going of vacuuming the shelves, throwing out expired stuff and relining the shelves.
But in the process of cleaning, I came upon an old yet distinctive jar of Ovaltine. 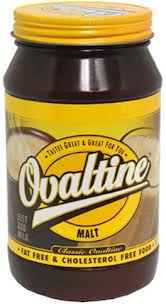 There’s only one person in my family who used to drink Ovaltine and that person was my husband, who is no longer with us.  Sad to say and embarrassed to admit, but that jar of chocolatey malted powder has sat there in the back of the cabinet for almost nine years.  I know.  Nine. Years.
I would see the jar but not really see the jar if you know what I mean.  There were times when I would scold myself and say “This is ridiculous!  Why are you holding on to this Ovaltine?”  But there was something about it and I couldn’t bring myself to toss it in the trash can.  It just reminded me of him so much.  It was his thing.  And no, I did not open the jar.  God knows what I would have seen!
You know how they say that deciding what to give away and what to keep is a hard process when going through a loved one’s belongs after they have died?  Well, that is true but in this case I think I went too far.  It was only a jar of Ovaltine and yet it sat there for ages.  I guess it was a reminder to me of my husband and it didn’t seem like a big deal to keep it in the cabinet.
But I did hold the jar in my hand for a long time before I threw it away.  I allowed myself to go backwards in time, to a time when we went grocery shopping together and he would always throw a jar of Ovaltine into the cart, a time when he would mix the Ovaltine into a tall glass of cold milk and talk about delicious it was, to a time when Ovaltine was supposed to make him feel better when he was sick.
Who knows why I was ready to throw the Ovaltine away on Saturday!  Maybe it was because I was throwing other stuff away and felt like I was on a roll to declutter or maybe I was just ready to see it for what it was: an old jar of Ovaltine.
I surprised myself by my inability to let go of such a simple item.  Some things that belonged to my husband I very easily discarded, donated or threw away.  Just because the jar is gone doesn’t mean I threw away the memories too.
Share this post:

Work Can Be Rewarding