Oh, I get by with a little help from my friends,
Mmm, gonna try with a little help from my friends. . .
~ The Beatles
Whether it’s alcoholism, gambling, overeating, drug addiction or grief, I believe that others who are traveling the same unpredictable path as ourselves can often offer the greatest amount of inspiration.
It may seem slow and incredibly painful but I found that when you sit and share your story with others facing the same issues, there is a sense of relief that you have finally found people who understand the depth of what you are feeling and how hard it is to handle.  In searching for a way to begin healing, support groups offer safety because you find you are not alone in your emotional turmoil.
In my grief support group, I was particularly inspired by a middle-aged woman who had lost her husband and an adult child.  I would listen to her and be amazed that she somehow had found a way to carry on with her life.  Given the same circumstances, I’m not even sure I would be able to get up, get dressed and get out the door of my house.  Seriously.
Laying bare your pain, guilt, shame, anger or even desires sounds like it would be a humiliating experience but I never found it to be.  In support group meetings, I was totally vulnerable but I wasn’t afraid to talk and share because I had found an atmosphere of support and understanding.  There was no criticism or censoring of any kind.
And that kind of support can take you anywhere you want to go.
In Boston, it took Marty Walsh all the way to the mayor’s office.  Walsh’s background is as a state legislator and a labor leader but the other part of his amazing story is that he also believes in extending a helping hand to those with addiction problems. 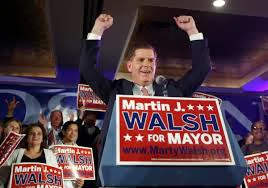 Walsh, a recovering alcoholic who still attends AA meetings after 18 years of sobriety, was elected Nov. 5 to the city’s highest office, the office of mayor, with the help of many former drug addicts and drinkers who worked on his campaign staff and also volunteered canvassing door to door to get the word out about Walsh.
Walsh said the support from former addicts was invaluable to him not because of the political rewards that came out of their work but because of the personal and emotional rewards of watching people find hope, get involved and work for something they believe in.
“They give me the emotional strength to keep moving,” Walsh said in an interview with The New York Times.
And that, my friends, is the essence of why support groups work.
They give you the emotional strength, the strength you so desperately need, when you are adrift in a sea of hurt.
Congratulations Marty and good luck to you!!
Share this post: