For the past four years, I have been watching a member of my family refuse to forgive someone.

How could someone voluntarily lug around that much baggage every day?  How could someone consciously decide, all on their own, every day, that they would rather be angry with someone 24 hours a day, than try to fix the problem by opening up an honest dialogue and talking about it to the other person? How can you constantly refuse to accept the hundreds of apologies that have been offered?

I guess I just don’t understand the complexity of the problem between the two people. 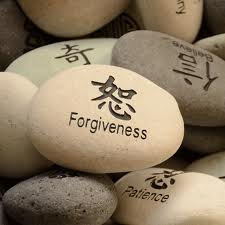 I don’t know what happened to cause this Grand Canyon of a rift and I don’t want to know.  Nor does anyone else.  We sort of have an idea but whatever happened is in the past.  It cannot be undone or changed.  It may have been really bad or not so bad.   That’s beside the point. We are all human and we are all capable of making mistakes of all sizes.  In this particular family situation, one person has profusely apologized, over and over, and still there is no effort from the other person to accept the offerings to make peace.  So there you have it.  One person has acknowledged their role and the other does not see their role in this at all.

When an apology is refused, I think it can only mean that the other person likes to stay stuck in the past.  It doesn’t seem to occur to this person that by yammering on and on about the past, and all (the list is endless) of the old perceived grievances, the possibility of a happy future or even a more pleasant future, is swiftly passing this person by.

It makes no sense to me at all.  I have no idea how someone allows that much hurt and anger to eat at them all the time.  And it does eat away at this person because everyone can see how very, very unhappy this person is who refuses to forgive.  There is no way that this person is satisfied with their present station in life.

It seems obvious to say, but still I feel the need to say it, none of us knows how long we have on this Earth.  What we do know is that we have a limited amount of time, so why not make the best of it instead of getting emotionally stuck in one place?

I know forgiveness is not an easy exercise to put yourself through; especially in a family.  Everybody knows which buttons to automatically push and things that happen sometimes relate to other things that happened.  It can take awhile to work through the hurt, the confusion and the feelings of betrayal.

But forgiveness is ultimately a gift you give yourself.

When I was a child, I used to think that when you forgave someone that you were saying to the other person that what they did to you was okay.  It has taken me years and years to see that true forgiveness of another person is something else.  To me, it’s an acceptance that something happened that upset me or hurt me.  I didn’t like it but I also know I can’t hold on to it because I am only hurting myself.  Depending on what happened, I either try to talk to the other person or contact them in some way so that we can figure it out and move on.

It’s a letting go process; a peacemaking process; a way of saying to yourself that you are not going to let this incident hold you back from continuing to have a relationship with this person.  Obviously you care about the person who hurt you; otherwise it wouldn’t have had any effect on you.

I pray every day that this situation will resolve itself.  It would be wonderful to see the powers of forgiveness wash over both of these people.

Believe me, everyone concerned has learned from watching it and the take away message is huge.

9 Responses to “An Amazing Gift To Yourself”

There Is A Season (Turn, Turn,Turn)

Confessions of A Mediocre Widow By Catherine Tidd