Today is Good Friday, the Friday before Easter, and many Christians will spend the day praying, fasting and reflecting on the crucifixion and death of Jesus Christ.
I am working today so I will try to reflect and pray but I will be squeezing it in between my office projects and the usual running around I do in order to keep all the balls in the air.
Good Friday signals that Easter is almost here and that means that the end of Lent is also almost here.
That’s good news for me because this year for Lent, I gave up chocolate which I totally love, especially when it’s been sitting in the refrigerator. 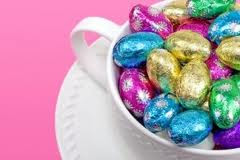 I have not eaten chocolate for 45 days.
I can’t believe it myself.  I didn’t think I would make it this long.  I thought I would break my Lenten promise not to eat chocolate and that somewhere in those days before Easter I would eat a bag of M and M’s.
But I didn’t.  And I feel a lot better for it.
A few days before the beginning of Lent, I was beginning to feel powerless over chocolate.  I would eat it and then tell myself that that was it, chocolate wasn’t good for me and I wasn’t going to eat anymore.
But it didn’t work.  The chocolate was talking to me.
Whether it was a chocolate chip cookie or chocolate candies in the kitchen at work, I realized I couldn’t keep it up.  I had to put the brakes on the chocolate.  Luckily, Lent came along at just the right time.
I have to admit that chocolate did come close to my mouth one or two times.  I was at a party and there was a bowl of wrapped chocolates just sitting there.  Automatically, I put my hand out to take one (or two) and then that little voice inside me said, “You gave it up, remember?  Don’t even think about it.”
Another time I was at my parents and my father loves to nibble on trail mix.  When I was pouring it into a small bowl for him, I did the same thing.  I automatically went for some and then realized there were bits of chocolate mixed in to the nuts and raisins.
The idea of giving something up for Lent is symbolic.  Jesus gave up his life for us and the least I can do is try to change a small habit during Lent, right?  You can be creative about Lent.  You don’t have to give something up.  Instead, you can try to do something positive such as being more patient or thinking twice before making an unnecessary comment.
Whether it’s chocolate or kindness, I am glad to have stepped back, reset my actions and taken a break from a bad habit.
Who knows. . . Maybe I even earned a little grace along the way, which is always a good thing! 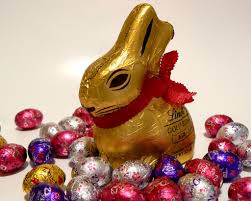