Yesterday I wrote about one small aspect of holding on to a deceased loved one’s material things for a long time.  It’s a rather large emotional minefield of an issue but if you ride along with me for a bit more today maybe we can make some progress together and get on with it.
Let’s be real:  nobody wants to hurt and nobody wants to feel pain.  It’s in our DNA to try and protect ourselves and so we naturally want to run away from pain and suffering; even sometimes to deny its existence.  I think this is one of the main reasons why painful issues hang around for so long and aren’t resolved quickly.  They just plain hurt.Unfortunately, I know this for sure:  you are only delaying the inevitable.  At some point, you’re going to have to feel the hurt and pain to get to the other side which actually can be very freeing.  This time around for me, it was a jar of Ovaltine, but it could be anything the next time: a possession, a feeling, a person or even a situation.
I think it’s almost similiar to that feeling you may have had as a child while working your way across the metal monkey bars on the school playground.  You notice I said metal.  I’m old enough that those playground structures like monkey bars were made of metal so when you put your hands on them they were either blistering cold in the winter or burning hot in the summer. 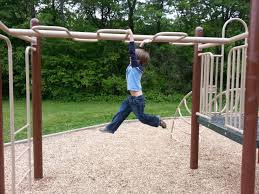 While hanging from the bars and trying to swing my body back and forth, I knew I was in safe territory as I slowly but surely moved forward to the other side.  It was familiar and all I wanted to do was reach the other side and let go.  And then there were those times when I would miscalculate and I would get tired and be hanging somewhere in the middle.  “Oh no,” I would think, “I’m almost over to the other side.  I don’t want to drop and fall to the ground.”  The ground seemed so far away and I didn’t want to release my hands from the bars as much as my arms and hands might hurt.  I wanted to stay on the bars.
It’s the same with being hooked on a comforting feeling that a possession, a person or a situation can give you.  You’ve convinced yourself that everything will be okay if you have that possession, person or are in that set of circumstances.  It helps you ride through the pain, at least for awhile.
For me, pieces of paper with my husband’s writing on it were comforting.  It didn’t matter what he had written.  It was just the quick glance at his distinctive handwriting that would make me feel better, as though he had just handed them to me.  I would fold them and put them in my purse, pin them on the bulletin board behind my computer at home and generally just leave them lying around.
Then one day, and I would say it took about a year for me to feel this way, I started to actually read the papers and really look at them and I realized that keeping all these papers was getting to be messy; that keeping one or two significant handwritten notes was enough and I could toss the rest in the trash.  The papers were getting in the way of moving forward.
The process of learning to let go happens at a different pace for all of us.  Sometimes we move quickly through anger or frustration and slowly through anxiety or it can be the other way around for another person.  We are all different in our ways of handling and expressing grief.
Just as we work our way across the monkey bars one by one, we work our way slowly but surely through the grief process, step by step, beginning to heal and feeling oh so much stronger as we reach the other side.
Share this post: