I never know when I am going to read or hear something that I might want to use in writing a future blog post so I try to always carry a small notebook with me.  On the times that I have forgotten my notebook, I have written notes on the back of envelopes, cocktail napkins and business cards which then creates this messy pile of stray notes.
For now, the small spiral notebook I am using is almost full and it caused me recently to flip through the worn pages to check and see if I had missed anything that might be helpful to myself and others who are trying to rebuild their lives after a loss or strengthen their resilience when facing life’s unexpected trials. 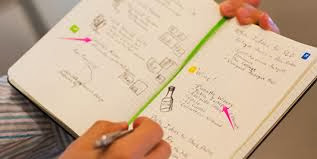 And then there it was.
Handwritten notes from a sweet conversation I had this past summer on the beach with a young woman in her twenties.  She had lost her grandfather and an uncle within a few months of each other.  We had just met and were casually talking about ourselves.  I told her about Cry, Laugh, Heal and surprisingly she then began telling me about her experiences with loss.
I write about this conversation today after so many months because I was struck by the common thread in her thoughts and the fact that if I closed my eyes and forgot about her age she could have been a member of my support group made up of people much older than herself.  She was voicing many of the same feelings older people have expressed after losing a loved one:  the need to talk, the shock and confusion and the contradictions brought by the pain of loss.
“People know you are going through an awful time of it and yet they talk to you as though nothing has happened,” she said remarking on what it was like to go back to school after attending the funerals.  “I think people react this way because it’s far too messy for them and they also think they’re upsetting you.  And they definitely don’t think about how you might want to cry and release your feelings.”
She continued talking quietly about this experience and said after a period of time following the losses she knew she needed to be part of a  trusted discussion addressing grief issues.  The loss of her uncle and her grandfather made her realize that she needed to join a support group and she was so glad that she did.  She wasn’t sure what she would find or what it would be like, but she came away surprised and also curious about the amazing dynamic that had occurred in her group.
“Isn’t it weird how you can find yourself in a support group, among people who you have never met before, people who are strangers, and you start speaking honestly from your heart about how you really feel and what you are really thinking about.  I found that I was saying things to strangers that I couldn’t tell my loved ones, the people who have known me for most of my life.  And for some reason the other people in my group felt that way too.  And it worked.  I felt I was with new friends.”
Our discussion about life and loss was not for long; I would say at the most it was about 10 to 15 minutes.  But within that short window of time while we talked, I felt her willingness to expose her vulnerability on the contradictions of these grizzly subjects of loss and resilience was amazing.
Here’s why:  in her young soul she had dug deep and found strength in a truth that sometimes takes many of us (myself included) a life time to discover.  That truth?
Her words say it best: “Sometimes beauty comes out of pain.  I found that something good can come out of something tragic and that’s hard for people to understand.  I think people are afraid to say something good came out of someone’s death because we are afraid it would be seen as though we were glad that it happened when of course that is not the truth at all.  No one, no one wants anyone to feel that pain but it’s surprising to discover that a light can come out of darkness.”
Share this post:

Keeping Love In Your Heart